Vascon Moorthy Foundation (‘VMF’) completed 9 years of long and meaningful journey contributing tirelessly towards the well being of community of construction workers, working on Vascon sites.

Activities undertaken by VMF during the year are as follows:

Eye Check up camp at Windermere site Koregaon park: Construction industries are hazardous mainly because of dust from cement and other materials used on site. These dust particles may be harmful to eyes and due to poor financial condition of the workers their negligence regarding the same; they avoid getting their regular eye checkups. VMF has been focusing on it and organized eye checkup camps at Windermere site Koregaon Park 17th Dec 2016 in association with H.V.Desai Eye Hospital, Mohamadwadi, Hadapsar. Total 54 workers took benefit of eye check up camp including children. Eight workers received spectacles at a concessional rate. Doctors of H.V. Desai Eye Care Hospital also explained to the labourers about the care to be taken during welding. We are grateful to Dr. Priyanka Chalak Dr. Swapnil Gaikwad & team of H.V. Desai Eye Care Hospital for their valuable time spent with our labourers.

Immunization: Prevention is better than cure!

Preventive Health Care is one of the major components of the extensive Health Care Program implemented by VMF on all the construction sites. Due to continuous migration, labourers and their children are deprived of preventive health care program. 105 children from construction sites have been immunized in the year 2016-2017, against Polio, Triple vaccine, Jaundice, BCG, Measles etc. It has been possible with the help of Niramay NGO,PMC, health department. Parents of these children are convinced for immunization camps. The response to these camps was overwhelming. Doctors and the nursing staff built excellent rapport with the parents and gained their confidence.

In the year 2016-17, VMF focused on the preventive and curative health care of the construction workers, with the help of existing Government health services. A total of 48 health checkup camps were held on all the sites in Pune. Total 1805 Workers benefited from these camps. Curative aspect of the programme enthused the workers. Getting medicines, vitamins as well as iron supplements free of cost was rewarding for them. Construction industry is a hazardous industry; cuts and wounds are very common while working on sites. Total 641 workers were given T. T. This will be an ongoing programme every month. In these health camps 30 children got De-worming doses and 23 children received Vitamin A doses. Teams of PMC and PCMC Health department from various hospitals come to site on regular basis. Anaemia is one of the sever problem in women, during the health camp most of the female workers received iron and folic acid supplements. 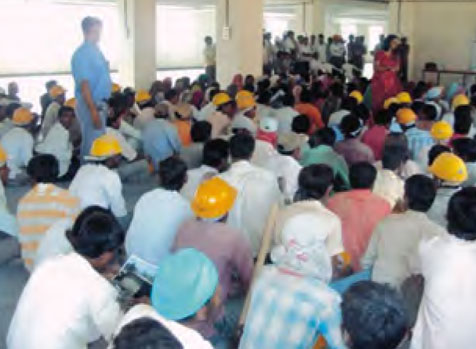 Construction sites Labour’s continuously keep wandering in the urban centres in search of work. This is considered to be a high risk population, as far as, HIV & AIDS is concerned. They have very little awareness about it and have many misconceptions about the illness. VMF staff covered 1 Site in Pune city for the scientific HIV/AIDS awareness programme at Take point site Kharadi Pune and 1 at Hotel Taj Gateway Shirdi site, a total of 160 workers were covered including female. It was very good that many people asked for the referral services available in city. They were given the address of Voluntarily counselling and testing (VCTC) centre. They were also provide the addressee of the Anti Retroviral Treatment (ART) centres. After the HIV & AIDS Awareness programme, condom demonstration shown to male workers and condom distributed.

De-addiction: Alcohol and Drug Abuse, lowers self-image, causes fi nancial stresses, and tears families apart. Most of the construction workers consuming alcohol, chews tobacco and Gutka. To make them aware about the side effects of these addictions, VMF conducted an awareness program on de-addiction at Godrej site Undri. Total 49 labourers attended the program.

Cervical cancer is a major problem in women after the age of 40 years. HPV is named for the warts (papillomas) some HPV types can cause. Some HPV types can lead to cancer. Men and women can get cancer of mouth/ throat, and anus/rectum caused by HPV infections. Men can also get penile HPV cancer. In women, HPV infection can also cause cervical, vaginal, and vulvar HPV cancers. But there are vaccines that can prevent infection with the types of HPV that most commonly cause cancer. VMF conducted HPV awareness program for the female workers of Forest County site. Total 55 female worker attended the program and 3 of them got tested in the clinic. This camp was organized by VMF with the help of PRAYAS NGO, Pune.

Tuberculosis is the number one health problem in India. Tuberculosis (TB) is a disease caused by germs that are spread from person to person through the air. A person with TB can die if they do not get treatment. Due to communicable disease, there is need to create the awareness among workers. VMF conducted T.B. awareness programme for the workers at Windermere site Koregaon park. Total 50 male and female workers attended the program. One of the worker refer for diagnosis and treatment of T.B to Rajiv Gandhi Hospital (PMC). 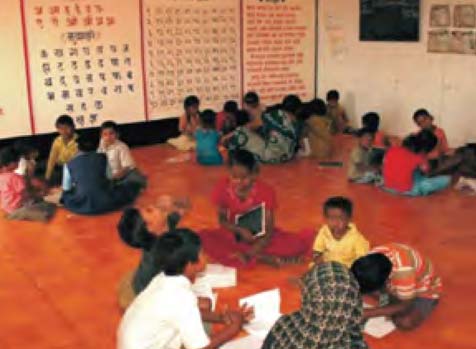 Since construction industry is hazardous, safety of children on construction sites is very important. Both the husband and wife work on the site and there is nobody to look after the children at home. If women stay at home they will lose out on opportunities to earn wages, which is important for them to earn their living. Vascon Moorthy Foundation runs Day are Centres at construction sites with the help of Tara Mobile Crèches and Ashakiran Shelter Foundation at 3 sites to take care of children at crèches and women are assured that they have left their children at a safe place and can go to work with a calm mind. In crèches children get nutritional food, toys to play, animated movies for entertainment and of course they get pre primary formal education too.