The real estate sector is one of the most globally recognized sectors. Real estate sector comprises of four sub sectors – housing, retail, hospitality, and commercial. As per reports real estate sector in India is expected to reach a market size of US$ US$ 1 trillion by 2030 from US$ 120 billion in 2017 and contribute 13 per cent of the country’s GDP by 2025.

According to data released by Department of Industrial Policy and Promotion (DIPP), the construction development sector in India has received Foreign Direct Investment (FDI) equity inflows to the tune of US$ 24.91 billion in the period April 2000-December 2018.

Segments like affordable housing, hospitality and warehousing are growing at a very fast pace in India presenting wider opportunities for investors across the globe. 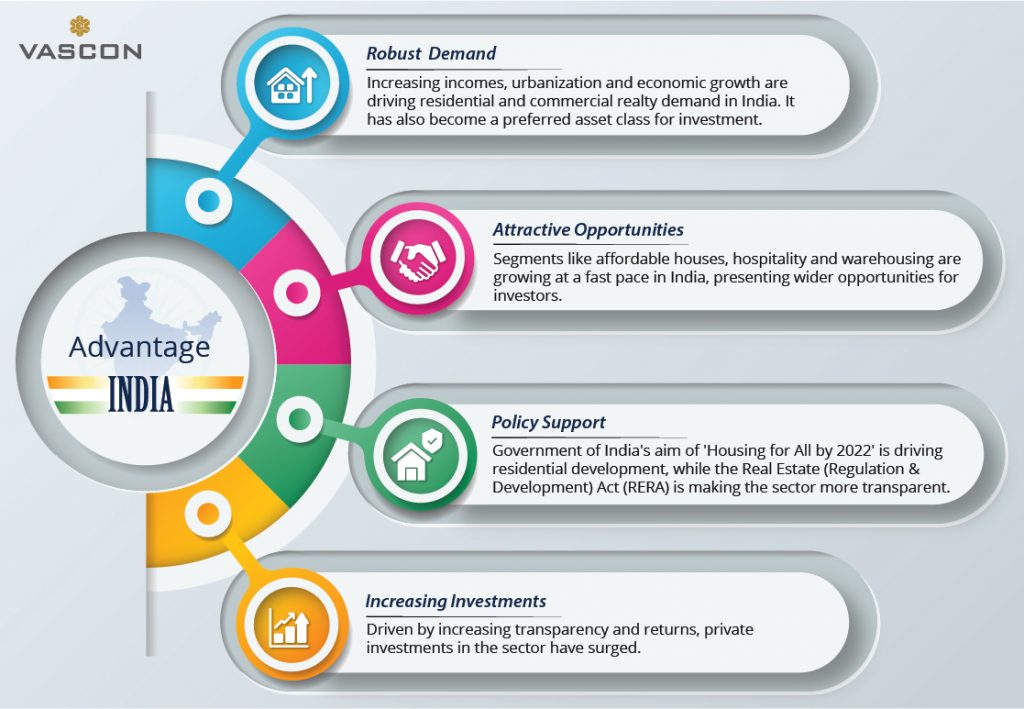 The Government of India along with the governments of the respective states has taken several initiatives to encourage the development in the sector. Pradhan Mantri Awas Yojana (PMAY)is one such initiative that aims towards catering the ever increasing demands of housing in urban regions. Under the scheme of Housing for All by 2022 scheme, the Government plans to pursue construction of 20 million (2 crores) homes in the urban areas of India.

The introduction of the Real Estate Regulatory Authority (RERA) Act, by the Parliament of India, came as a welcome move for the home buyers in India, giving everyone the means to address issues such as project delivery delays, property pricing, quality of construction, and title and other changes. The Act was established with the goal of bringing in unprecedented efficiency and transparency in the Indian real estate sector

The Smart City Project, is another vital initiative where there is a plan to create 100 smart cities across India. Pune being one of them has also been identified as one of the fastest growing cities in the Asia-Pacific region. Pune has been able to create one of the strongest human capital and economic growth engines among Indian cities. With 811 colleges, it is often called the “Oxford of the East”. This has resulted in more than 30% graduate workforce, which has triggered the IT revolution in the city. Almost all of the top IT companies in the country have their presence here, making it the 2nd biggest software hub in the country. The city also has a strong manufacturing base across auto and engineering. Thus, Pune is among the top five foreign direct investment (FDI) destinations in India. It is also one of the successful start-up destinations in India with more than 400 local start-ups.

Vascon Engineers is a leader in the Real Estate sector in Pune, with a record of delivering more than 50 million sq.ft in over 200 projects  across 32+ cities in India Vascon marks strong presence in residential, commercial, retail, industrial, malls & multiplexes hospitality & community welfare sectors.

Vascon GoodLife is one of the fastest moving project at MIDC road, Katvi Pune, with 1 & 2 BHK homes at 23 Lacs & 30 Lacs (all inclusive). It is a host to a plethora of thoughtful amenities for all age groups like updated library with 500 books, video door phone, home automation, study room in each tower, day care centre, sports coaching, cricket pitch, online education rooms, temple, community hall, senior citizen enclave to name a few. Located close to high growth and high employment hubs such as Hinjawadi, PCMC and Chakan, Katvi is a preferred destination. It also enjoys excellent connectivity as it located close to the Mumbai-Pune Expressway and the Talegaon railway station. Goodlife has numerous advantages as a residential destination and is thus an excellent investment opportunity.